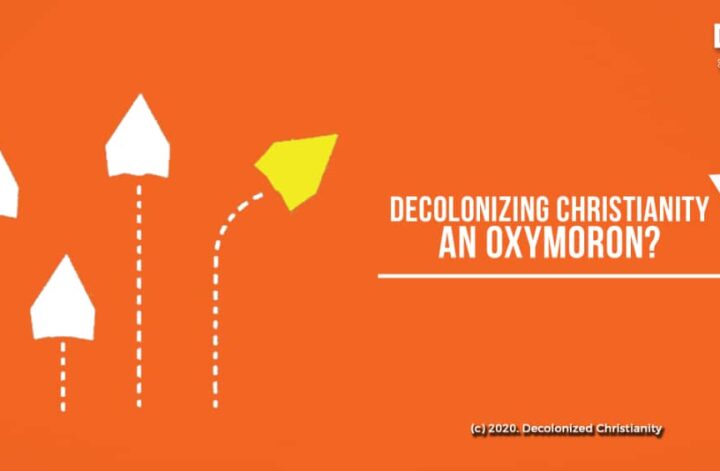 Often, I have observed people taken by surprise at the expression of thoughts such as “decolonizing Christianity.” To many a person, that idea sounds eerily like saying “loving hatred.” Many people—somewhat understandably—really believe that “colonization” and “Christianity” are synonyms. Now, to be fair, this notion is largely true for Sub-Sahara Africa considering that, as far as we know, no European state-sponsored missionaries ever came to Sub-Sahara Africa purely to preach about Jesus. On the contrary, each missionary trip to Africa was a largely militant (hence, the “mission” in “missionary”) trip to subjugate people and to exploit the natural and human resources. If the natives later believed in their remodelled, attenuated, and whitewashed Jesus, all the better. Hence, what sub-Sahara Africa received was not Christianity per se, but what I call colonization Christianity.

Given the facts above, is Christianity—the worldview embodying the teachings of Jesus and his Apostles—synonymous with colonization (and slavery)? It is not hard to see that this cannot be true at all. Here are a few points:

First, Jesus and his Apostles never forced anyone into believing. On the contrary, they were recipients of physical abuse for what they preached. Many of them paid the ultimate price for their preaching. Also, all that Christian preachers did was present their arguments before their audiences, and the audiences chose to either believe the message or not believe. It is critical to notice that even after believing, the new converts were discouraged from becoming culturally Jewish. The Apostles insisted on not “Judaizing” their non-Jew converts. They did not ask Gentiles to circumcise themselves or observe sabbath laws or any other rituals associated with being an ethnic Jew. In other words, Christianity did not endorse one culture as being superior to others. Therefore, the charge of Christianity being a colonizing tool is indefensible.

Second, Black Africans in ancient places like Aksum (ancestor of modern Ethiopia and Eritrea), Meroë, “Aethiopia,” and Cyrenaica embraced Christianity long before any European dreamt of sailing. Even the New Testament leaves us with a record of Black people actively involved in Christian ministries. The “Niger” appended to the Simeon of Acts 13:1, for instance, is a definite reference to his black complexion. Edwin Yamauchi writes: “The Latin nickname Niger means black, referring no doubt to his complexion. It was commonly used of Aithiopians” (185). In a footnote on the same page, Yamauchi elaborates in this latin term thus: “The term Niger gave rise to the word Negro and its pejorative corruption Nigger, as well as to the names of two countries in Africa: Niger and Nigeria.” This Simeon, it should be noted, was not a new convert but a recognized teacher and/or prophet in the Church; he was a church leader. Besides, the “Ethiopian” eunuch of Acts 8:26 – 40 is black and from Nubia (Yamauchi, 164 – 173). So, we see that at the time when Peter and Paul were active in ministry, Sudan-black complexioned people also participated.

Third, Christianity played a key role in ending slavery (as well as infant exposure and Gladiator contests) in Rome (Hurtado, 143 – 182.) So, whatever connection “slavery” and “Christianity” have in our minds today was a later European development.

Fourth, there always were contrary minority voices throughout the periods of European aberrations and weaponization of Christianity that would eventually be introduced to sub-Sahara Africa. Many abolitionists were Christians who consistently insisted that slavery was anti-God. In other words, it is intellectual dishonesty to equate Christianity with slavery/colonialism when there were people in the Church at those times who spoke against the dehumanizing enterprises. Are we to say that the slavers were the real Christians but the critics were not? Besides, there were slaves and ex-slaves, like Frederick Douglass, who, despite being the recipients of the brutality and inhumane treatments of slavery (and racism), embraced Christianity. Douglass incisively critiqued the white man’s Christianity of his day while stressing that true Christianity was to be distinguished from the aberration.

Given the reasons above, it is not tenable to maintain that “decolonizing Christianity” is oxymoronic. Indeed, one of our goals here is to strive to cleave what is European (and harmful) from Christianity. We are aware that this is not going to be an easy task considering that we were socialized in the systems we are critiquing – no, it has not escaped my mind that I’m typing in English. Doing this work will involve switching theological lenses, seeking alternative hermeneutics, positing different assumptions, appraising native mores afresh, and so on. Such foundational efforts will help in shedding light on many of the subtle, lingering damages of eurocentrism in our churches.

Now, suppose we are successful at isolating “genuine Christianity” from colonization Christianity. Would this mean that the product so isolated is true? Not necessarily. Christianity in its pure form will still need to be argued for in demonstrating that it is true. So, no, crystallizing Christianity from colonial bastardization will not necessarily make it true. But, such a success would require anyone predisposed to dismissing Christianity to do so without viewing it through the lenses of the innumerable horrors that Europeans (and others) have done in its name. The persons who would dismiss Christianity would have to do so by seriously engaging with the original worldview that held sway for about 300 years – before Emperor Constantine reigned. They should separate the aberrations from the teachings of Jesus and his Apostles.

At Decolonized Christianity, we hope to empower African Christians to engage with the faith with all their “Africanness” as well as help people to recognize the many aspects of colonialist ideologies and practices masquerading as Christianity. We want to expose and remove mental roadblocks. The ultimate goal is a hope that this will help unleash creativity and substantive contributions to nation-building all over Africa.